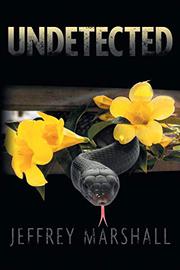 On the back nine of her 60s, a beautiful, canny woman remains a pro at snagging rich old duffers, then leaving them in the rough, and possibly in the ground.

In Marshall’s (Little Miss Sure Shot, 2014, etc.) first thriller, septuagenarian Dean and sexagenarian Suzy Perry married recently, shortly after the death of the bride’s previous spouse. On the surface, Suzy seems the ideal country club wife for moneyed Dean, whose house overlooks a golf course. But the slim, bridge-playing, Mercedes-driving blonde may have skeletons as well as Prada in her Westchester County closet. She talks little about her previous life in Atlanta with her former husband, who died of a heart attack that surprised everyone, including a cardiologist. Some sleuthing on the part of Dean’s son, Alex, reveals that Suzy may have had yet another husband who unexpectedly died decades earlier from heart failure in suburban St. Louis. If true, Suzy had a different name back then—Bettina—and a child who seems to have vanished. Or was it Bettina who vanished, morphing into a psychopath with no past and multiple murders on her score card? Her disturbing backstory includes abuse, betrayal, and an injury that resulted in a permanent limp “that sullied an image of otherwise near-perfection, like a blotch on the front of a snow-white dress.” Lively conversation and playful descriptions such as a dog’s “wagging his curved tail like a metronome” fill the pages. Points awarded for a thriller with a median character age that appears to be bumping 60. The book starts strongly, with Suzy on the run and the past events revealed at a good pace. Midbook the introduction of a blackmailer works well, but a disturbing medical issue has no follow-up. Ultimately, like Suzy herself, the story ends up limping a bit, though the final few pages may tempt a reader to a smile and wonder if a sequel could be crafted.

An above-par thriller hitting the sweet spot between sympathy and repulsion for a probable killer.