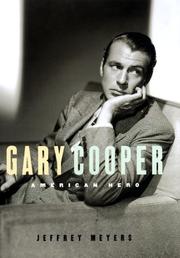 The indefatigably prolific Meyers (Bogart: A Life in Hollywood, 1997, etc.) continues to work his way through the major icons of American film. Gary Cooper didn’t set out to be an actor. Given a choice, he would have preferred to be a painter in the mold of the great western artist Charles Russell. But he was born into the roles in which he became best known, a lanky, laconic westerner, son of English parents living in Montana, raised on a ranch but educated (albeit briefly) in England. He fell into film acting more or less by accident, taking extra and stunt work while living with his family in Hollywood in the mid-1920s, replacing a missing actor on a silent western and revealing an affinity for the camera. His rise was stunningly fast, so much so that in 1931 he suffered a nervous breakdown. When he returned after a few months— rest, he became bigger than ever. What is forgotten about Cooper is that his best work was not in westerns (or his equally famous pair of Frank Capra films, Mr. Deeds Goes to Town and Meet John Doe) but, rather, in the more rarified world of romantic comedy, particularly in an unlikely but highly successful series of collaborations with the urbane Ernst Lubitsch (Design for Living, Desire), Howard Hawks (Ball of Fire) and Billy Wilder (Love in the Afternoon), and romantic dramas like A Farewell to Arms. Meyers seems more interested in recounting Coop’s numerous sexual conquests—his tempestuous affair with Lupe Velez, his several marriages and various dalliances—than in the films, and his critical judgment is unexceptional. Frankly, he has little of interest to say about the films, and when he attempts to generalize (as in a lengthy peroration on the role of the 1929 version of The Virginian in shaping the film western), his statements are riddled with clichÇs and inaccuracies. The book’s lifeless prose suggests great haste and no small lack of interest. (16 pages b&w photos, not seen)