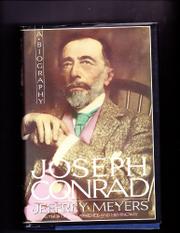 Although he promises important new information about Joseph Conrad's life, most of what is new in this hefty biography from Meyers (D.H. Lawrence, 1990, etc.) is of minor significance. For a great writer, Conrad had an unusual life, growing up as the child of Polish revolutionaries, becoming a young seaman in English merchant ships, sailing to the Far East, commanding a small steamship penetrating the depths of the Congo, and struggling against huge odds to write in English some of the greatest stories and novels of the past century. All this has been covered by Jocelyn Baines (1960), Norman Sherry (1966, 1971), Frederick R. Karl (1979), and most importantly by Zdzislaw Najder (1983). Drawing on these and on the now-appearing collection of Conrad's letters, plus occasional other items recently come to light, Meyers has thrown together a decent survey of what is known of Conrad's life, together with some minor additions and speculations of his own. But this is not a critical biography, and it is certainly not a major new interpretation of the life and works. Meyers it seems mainly wants to show off new bits of biographical trivia that he has accumulated. The level of much of this is demonstrated by the concluding sentence of chapter three: ``In fact, his life had been radically changed—for the third time—by a series of events that began with an infection between his buttocks.'' In a self-justifying preface, Meyers claims to present new information about many aspects of Conrad's life, ``most importantly, his love affair in 1916 with the wild and beautiful American journalist Jane Anderson, who became a traitor in World War Two.'' And Meyers does breathlessly tell more about her, thanks largely to an old lover and her FBI file. But by his later years Conrad was no longer writing anything of interest anyway, so what influence this fling and she had was of little consequence. And so is most of what is ``new'' in this book.