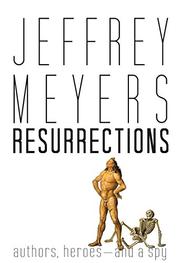 An experimental memoir told in a series of biographical sketches of the author’s friends and colleagues.

In his latest book, Meyers (Robert Lowell in Love, 2016, etc.) attempts to revive appreciation for 14 underrecognized writers, artists, and scholars. Composed of short profiles on authors like Phillip Knightley and Paul Theroux, the book provides an insider’s view of their personal and professional lives. Drawn from “learned gatherings” and the author’s lengthy correspondence with his subjects, the narrative consists of intriguing, brief portraits, rendering each into “a colorful legend among the colorless academic drudges” (about critic Donald Greene). In the first section, Meyers focuses on his personal acquaintances, and the second features essays on five inspirational men he wishes he could have met—e.g., scholar and Russian spy Anthony Blunt. Meyers appears prominently throughout his book; while the texts are meant to honor these artists and exalt their histories and bibliographies, they transform into recurring reflections of Meyers and what his subjects think of him. It’s a brilliant way for a biographer to finally write about himself, although the author frequently revels in his own praise. The all-male focus feels old-fashioned, as does the author’s “interest in masculine writers” and love of gossip (many profiles recount affairs and other sordid morsels). Meyers is frequently “eager to win his [subject’s] respect,” and he seeks relationships based on a mutual intellectual appreciation. He mentions his search for an “ideal father figure” throughout the book, but he rarely moves past his own reflection. On Hugh Gordon Porteus, Meyers explains Porteus “was delighted to be rediscovered by me.” Later, the author recounts his “treasured” friendship with James Salter through dinner-party anecdotes and snippets of their storied intellectual discourse. He circles around self-affirming details like how “Jim inscribed twenty-six various editions of his books for [him]” and even shares “the three best” dedications (inscribed in Salter’s A Sport and a Pastime: “To Jeffrey. Represents, I think, the apogee”).

Intellectually stimulating but self-aggrandizing—a portrait of the artist in portraits of other artists.