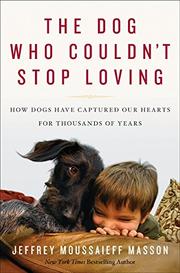 THE DOG WHO COULDN’T STOP LOVING

How Dogs Have Captured Our Hearts for Thousands of Years

Prolific animal-studies author Masson (The Face On Your Plate: The Truth About Food, 2009, etc.) examines the unique bond between dogs and humans.

Based upon evidence that the relationship has existed for at least 40,000 years, the author suggests that it played a major part in a process of “mutual domestication,” the simultaneous evolution of primitive humans to Homo sapiens and of wolves to canines. According to Stanford anthropologist Richard Klein, writes the author, humans experienced a “sociocultural big bang” around 50,000 years ago, when “language, culture, and the ability to innovate” were suddenly put on “fast-forward,” and Masson believes that the two species were drawn together by a shared unique capacity for love. Now approaching 70, the author lives in a New Zealand beach house with his wife, two young sons, three cats and Benjy, the golden lab to whom this book is dedicated and whose antics provide its framework. Unquestionably, dogs are an important part of our lives and have been for millennia. More disputable is Masson’s claim that their relationship to stone-age man as guard dogs, hunting companions or even perhaps a manageable source of food was less important compared to the “far more profound…effect dogs had on our ability to feel love, affection, and friendship.” Equally controversial is his suggestion that dogs are superior to chimpanzees, parrots and dolphins in understanding human language. The author is more even-handed in his consideration of the possibility that seeing-eye, narcotics-sniffing and rescue dogs may not understand the purpose of their actions they’ve been trained to perform, while acknowledging the benefits of their spontaneous companionship to the handicapped, the sick and the elderly.

A tendentious but enjoyable book for dog lovers.