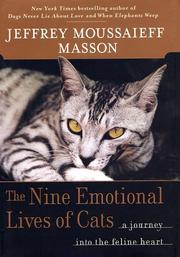 THE NINE EMOTIONAL LIVES OF CATS

A Journey into the Feline Heart

An exploration into the emotional complexity of cats, with lots of literary references but mostly personal observations, from Masson (Why Elephants Weep, 1995, etc.).

What Masson did for dogs in Dogs Never Lie About Love (1997), he does here for cats. As always when considering animal behavior, he admits from the get-go that he’s on sketchy ground, making speculations that are intended as food for thought: “We will probably never know what goes through their minds.” There are times when readers may wonder why he chose these “primary” emotions to investigate—narcissism, love, contentment, attachment, jealousy, fear, anger, curiosity, playfulness, and a dozen subsidiary states—when he is confounded by a few of them: “Are cats narcissistic? No.” Or “Is this jealousy, or is it perhaps some feline rule of etiquette?” But then, much of the time cats are nothing if not inscrutable, as Masson is happy to admit. Their mystery is much of their charm. Yet it’s Masson’s purpose to offer up considerations of cat behavior. Is their attachment a transference—a nostalgia—for the time when they were kittens? And when it comes to attachment, is it more to the world around them than to their human companions? (Masson believes cats are more fully happy when allowed freedom to roam, a point he presents persuasively, unlike many cat enthusiasts.) Much of what the author has to say is common sense: that cats show fear out of threat (but don’t worry; they live in the moment); show contentment from a sense of security (but not happiness: that takes freedom); and can communicate acceptance (purring has been known to lower human blood pressure, perhaps because we have been chosen by one so self-possessed).

Anyone who has ever been owned by a cat will find these speculations engaging, finely tuned, and always with plenty of fond anecdotal evidence as they charge across the species barrier.