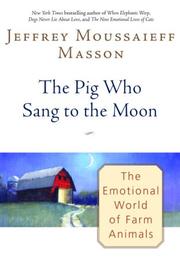 THE PIG WHO SANG TO THE MOON

The Emotional World of Farm Animals

This time out, Masson divides his time between intelligently speculating on the emotional range of farm animals and overreading the evidence to draw unsupportable conclusions.

In his fourth work on the complex emotional lives of animals (The Nine Emotional Lives of Cats, 2002, etc.), the author marshals his supply of anecdotal, literary, and scientific evidence in the service of farm animals. And again—with his standard caveat: “How can I, or anyone, know what an animal is really feeling? Of course we are guessing at the specifics”—he presents a compelling case for their distinct feelings and modes of expression. As an advocate for animals, a stance increasingly overt in his work, Masson calls for an end to “farmed” animals, their deeply unethical exploitation and death. He understands that he is overshooting the target to make a point about factory farms when he reminds us that eggs can be gathered from chickens under suitably ethical conditions. The problem is, Masson starts overshooting at will: “We have a strange relationship with cows,” he declares sweepingly. Who exactly are “we”? A picture of a pig and the moon, he avers, “is photographic evidence of her special affinity to music.” Really? A sow disturbs a farmer at work; he whacks her flank with a hammer; she chomps his leg without inflicting injury: “She had a sense of justice,” Masson asserts. Maybe. Maybe she just wanted to taste the farmer's trousers. Statements like “humans . . . will fall into a coma and die at 23,000 feet,” while the lordly goose soars much higher, desperately need qualification. Humans can also speed-climb to 29,000 feet without supplemental oxygen. They can fall into a coma and die at sea level, too. So can geese. What's the point?

From witness to provocateur to crackpot, Masson appears only marginally interested in winning over new souls; this is exclusively for the converted. (Illustrations)