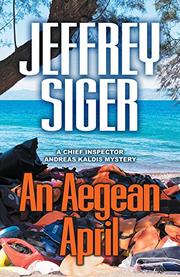 Brutal murder stains the idyllic Greek island of Lesvos. Is organized crime attempting to gain a foothold in paradise, or is this the work of refugees?

After a brief period of rampant tourism, the Aegean island of Lesvos has settled back into a sleepy, idyllic existence except for the droves of refugees, now unemployed, who came to serve the visitors. When influential Mihalis Volandes is violently killed, cut literally in half, local police arrest refugee Ali Sera, who’s been found spattered with blood, and workers’ advocate Dana McLaughlin comes forward to ask Chief Inspector Andreas Kaldis, based in Athens, to intervene. As Andreas shrewdly observes, the blood found on Sera is far less than it should be given the crime’s brutality. Sending his longtime sidekick, Yianni, to Lesvos to examine the crime scene, Andreas determines that this was a professional hit, staged to incriminate the young immigrant. Meanwhile, the powerful man who ordered the murder, presented to the reader anonymously, plots to derail this probe, with force if necessary, via Aryan, his hired assassin. Andreas and his team investigate methodically; his supersized detective Tassos, whose relationship with police secretary Maggie is blossoming, gains evidence by busting heads. When the trail leads to local government officials, the risk factor amps up considerably and the assassin on the loose becomes an unpredictable wild card.

The ninth case for Siger’s Greek detective (Santorini Caesars, 2016, etc.), brimming with suspense and a distinct sense of place, continues to deepen the back story of its band of heroes.