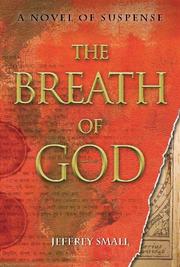 THE BREATH OF GOD

A Novel of Suspense

In Small’s (God as the Ground of Being, 2009) theological thriller, an American grad student traveling through Bhutan uncovers a secret, ancient connection between the world’s major religions.

In a remote monastery, Grant Matthews befriends Kinley Goenpo, a wise older monk who shares his spirit of curiosity. Deep within the monastery’s library is exactly what Grant has been searching for: ancient texts purporting to show a direct link between the teachings of Hinduism and early Christianity. The two join forces with Kristin Misaki, a free-spirited traveling journalist with whom Grant quickly becomes infatuated, to try to bring the evidence to light. They’re thwarted by conservative religious leaders, both in Kinley’s Buddhist order and within the evangelical Christian community in the United States. Most threatening of all is Tim Huntley—a Christian extremist, ex-soldier and ruthless killer—who makes it his mission to ensure that the texts are destroyed along with whomever stands in his way. Soon, the enigmatic Kinley disappears with the texts in order to protect them, leaving Grant and Kristin to follow his trail across India and Bhutan, with Huntley close behind them. The novel’s themes give Small, who studied religion at Oxford, ample opportunity to explore the history and common traits of different faiths. He handles subjects like the development of the Gospels and the nature of Hindu deities without slowing down the action. The storyline offers brief lessons on various locations—the Taj Mahal, the Hindu pilgrimage city of Varanasi and the mountaintop Taktsang monastery in the Himalayas—as they become focal points in the plot. A few moments feel a bit contrived, though, and the villains sometimes veer toward being melodramatically evil. Overall, however, the religious themes don’t come across as gimmicky, and Small seems sincerely interested in exploring the relationship between faith and fact.

A fast-paced adventure with a deep backdrop of religious scholarship.