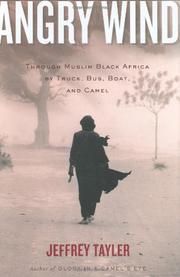 Through Muslim Black Africa by Truck, Bus, Boat, and Camel

An often scintillating if sometimes sluggish tour of the western Sahel, that narrow coast of dry land between the Central African rainforest and the oceanic Sahara.

Much of that country is ethnically black but culturally Arab, the product of nothing short of cultural imperialism among the Arabs, slave traders in the not-so-distant past. The Arab conquest of the Sahel is incomplete, writes Tayler (Facing the Congo, 2001, etc.), but ongoing and scarring. Why not, then, call it imperialism? Well, answers Tayler, “calling the presence of Arabs here unjust amounted to attacking Islam and was impermissible; hence the Africans suffered their anti-Arab grievances with downcast eyes.” Indeed, as Tayler travels through Senegal, Mali, Niger, Nigeria, and Chad, the open anger he encounters is almost always directed against America in the abstract (and sometimes against Americans, namely him, in the particular). The Sahelians’ anger is understandable, Tayler suggests. These poor regions have been badly used, left alone to suffer, and allowed to become failed states bound up as nations mostly out of geographic convenience during colonial times; and whereas France and England should properly feel their wrath, what the desert-dwellers see on television is America as anti-Islamic crusader. “To stop one man, Osama,” yells one Sahelian he encounters at a Chadian oasis, “you destroyed an entire country, Afghanistan—a country of the poorest people on earth. Is that manly—picking on those poor Afghans?” No empty rhetoric, that, and the Sahel, writes Tayler, is a fertile recruiting ground for al Qaeda; Osama bin Laden identified Nigeria as particularly ripe, sick as it is politically yet bursting with oil wealth. Not all of Tayler’s set pieces work, and his travelogue is sometimes as wearying to read as it must have been to research. Still, there are some fine moments here, and Tayler’s righteously indignant arguments against female circumcision should be required reading for the cultural-relativist set.

Moreover, Angry Wind merits a solid audience at the African desks of Western intelligence agencies. There’s trouble brewing in the Sahel, Tayler warns: Don’t say no one told you so.