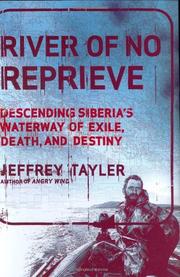 RIVER OF NO REPRIEVE

After 11 years in Moscow, American journalist Tayler took a river trip through Russia’s Siberian hinterlands, encountering a punishing climate and plentiful nostalgia for the communist past.

In the early 17th century, Tayler (Angry Wind, 2005, etc.) writes, the Cossacks sailed the Lena River from Lake Baikal to the Artic Circle, annexing the land for the tsar as they went. Since then, the settlements they established have been Russian outposts: home to exiles, ethnic minorities and pioneers who sought to build the Soviet state. Tayler set out to recreate the Cossacks’ voyage in the summer of 2004, traveling 2,400 miles of the river north in a raft. He was inspired, he explains, by a desire to escape the confines of Moscow and to try to understand the people who are President Vladimir Putin’s most stalwart supporters. The trip was punishing. Mosquitos and other pests abounded. Storms whipped up huge waves that threatened to capsize the raft. The guide, a veteran of the Soviet war in Afghanistan, made it clear from the beginning that he preferred the company of Siberia’s beautiful and barren landscape to that of his employer. Tayler, on the other hand, was interested in people, and he vividly sketches his sojourns into the remote river communities. Drunken, hopeless teens danced in shacks; drunken, hopeless adults bemoaned the end of communism; Tayler heard stories of underground nuclear blasts and resulting cancers; he saw villages abandoned and left to decay. Most of the people he met voiced enthusiasm for the Soviet days, glossing over Stalin’s death camps to remember the monetary support and sense of mission they had under communism. Their enthusiasm for Putin reflected their desire for a return to this idealized past.

An evocative glimpse of an isolated, seldom visited part of Russia, though its depiction of volatile drunks in a bleak landscape does no favors for the Siberian tourist industry.