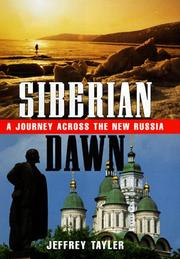 A Journey Across the New Russia

A young American’s encounters with arctic cold, violent vodka-induced drunkenness, unknown levels of radiation, and mafia-ruled hinterland cities reveal the bleak and desperate side of life in the post-Communist Soviet states. Inspired by his love of Russian culture and finding himself at loose ends in Moscow, Tayler decided in 1993 to cross the entire landmass of Russia. Naively enthusiastic, yet ill-equipped and underprepared, the young American started out on a perilous journey from the desolate byways of the Russian Far East, across Siberia and the Urals, to the Polish-Ukrainian border. The journey embodies both a personal quest and a search for the heart of Russia. Tayler explains, “I wanted to fuse my fate with the country’s in a crucible of my own making.” And a crucible it was. Against the odds of inadequate equipment, incredible coldness, unwise decisions, and the constant threat of violence in Russia’s depressed provinces, Tayler survived the solo journey. He describes his travels by bus, train, truck, and car, his fleeting friendships and sometimes violent encounters with almost uniformly desperate men and women, the astonishing changes in weather and landscape in this vast region, and the physical state of Russia’s hinterlands, including its environmental devastation—none of which is uplifting. The harrowing stories he shares about life in Russia’s desolate hinterland sharpen our understanding of Russia’s past and present with their unforgettable details: cockroaches emerging from hosts’ wallpaper and ceilings during a meal, scary confrontations with several of Russia’s drunks that lead to exchanges of words and blows, and the filth and dangers of life in polluted Chelyabinsk, the once-thriving center of the Soviet nuclear and defense industries. By the trip’s end, it’s a toss-up who is more relieved to cross the Polish border, Tayler or his reader. Graphically describes the deeply disturbing state of the “new” Russia and its demoralized citizens.