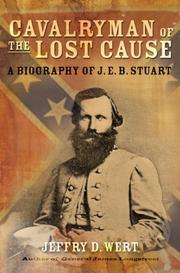 CAVALRYMAN OF THE LOST CAUSE

A Biography of J.E.B. Stuart

A sturdy life of the Confederacy’s knight-errant, “the bold and dashing cavalier” who evoked chivalry in a theater of carnage and slaughter.

Born in 1833 in Virginia, James Ewell Brown Stuart was a middling cadet at West Point and a touch undistinguished as an officer on the Western frontier, where the Comanches managed to elude his cavalry scouts. Nevertheless, writes Civil War historian Wert (The Sword of Lincoln: The Army of the Potomac, 2005, etc.), Stuart advanced in the officers’ ranks in the federal army. Perhaps his crowning moment was serving alongside senior officer Robert E. Lee in suppressing the abolitionist John Brown’s attack on the armory at Harpers Ferry. Stuart sided with Virginia in the secession and, owing in part to his friendship with Thomas Jonathan “Stonewall” Jackson and Lee, particularly the former, he achieved high command in the Confederate forces. Though pious and a nonsmoker and nondrinker, Stuart was Jackson’s opposite in taking a joyous view of life, a lightness that delighted his soldiers, even if many complained that he was also a stern taskmaster and even tyrant who told his soldiers on the battlefield, “You don’t want to go back to camp I know; it’s stupid there and all the fun is out here.” Under Stuart, Virginia troops approached the federal capital several times; the Virginia cavalry also did outstanding service at battles across the state. Stuart was brave and daring, writes Wert, if too sensitive to his public image. His vaunted charge at Gettysburg was tactically questionable and cost many lives, and in the retreat he broke from Lee’s force to conduct an ill-advised raid, which leads Wert to conclude that “Stuart failed Lee and the army in the reckoning at Gettysburg.” It would not be the last poor decision Stuart made, but he had the good fortune—doubtless Stuart would have considered it such—to be felled in battle and be enlisted in the Confederate pantheon.

A worthy work that draws on previously unknown correspondence to give a lively, from-the-saddle view of life as a rebel horseman.