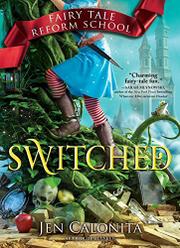 Gilly, the cobbler’s delinquent daughter, is still at reform school, still searching for her runaway sister, and still fighting the evil Rumpelstiltskin.

Even though Gilly has successfully petitioned for a change in the Fairy Tale Reform School’s rules to allow partially reformed students to stay and hone their skills, she continues to be her own worst enemy. Whether it is accidentally releasing a band of pirates into their new library, zoning out during one of Prince Sebastian’s (aka the Beast’s) lessons, or trying to help Jack (as in the beanstalk) escape the school, Gilly cannot stay out of trouble. What she needs to focus on is finding Rumpelstiltskin and her missing sister, but she keeps getting distracted by her falling grades, new friends, and old enemies. The danger is real, but the faculty and staff—composed of fairies, werewolves, mermaids, and more—seem unwilling or unable to protect Enchantasia. Now into its fourth volume, this fast-paced mashup of fairy tales successfully tackles real-life issues such as prejudice, gender-role conformity, and self-esteem. Gilly is white, but Jack’s brown skin demonstrates that Calonita is not limiting herself to the European default of the source material. More adventures are to come for Gilly, but in the meantime, a preview of a new, linked series, Royal Academy Rebels, is included to whet readers’ appetites.

Grimm favorites continue to battle for control of an enchanted kingdom in this satisfying series outing. (Fantasy. 9-12)

TURN IT UP!
by Jen Calonita
Children

BATTLE OF THE BANDS
by Jen Calonita
Children

I'M WITH THE BAND
by Jen Calonita