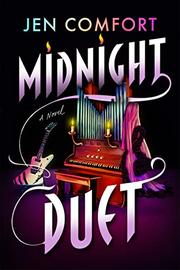 This modern, romantic spin on The Phantom of the Opera stars a former Broadway star and a German rock musician.

When a catastrophic accident on a Broadway stage leaves Erika Greene with a scarred face, she rethinks some choices she'd made in the past and uproots her life to Paris, Nevada. She'd inherited an opera house there from her grandmother; it's in massive need of repairs that she can’t afford, but Erika doesn’t want to sell to casino magnate Raoul Decomte. Her solution comes in the form of German hair metal band Nachtmusik, who want to rent the place while they develop their new album. The band’s frontman, Christof Daae, has always been an ambitious, focused planner, but he was blindsided when his girlfriend and band mate left. He hasn’t yet told the rest of the band: his sister, Sibylle, in tune with the macabre and mystical; Americana-obsessed Waldo; and Sergei, who gives off vampire vibes. Christof is immediately enchanted by opera house proprietress Erika, and she’s equally taken with him. But even when they act upon their attraction, Christof reminds himself that the band comes first. Musical theater fans will lap up all the references, but this romance populated by big personalities will appeal to anyone who likes their love stories on the zanier side. For a story with so much lust, there are only a few richly described intimate scenes; it’s more of a slow burn in that department. Sometimes the story loses sight of the tension that propels it and meanders a bit, but the characters are always compelling.