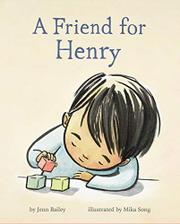 A FRIEND FOR HENRY

A boy on the autism spectrum considers his classmates as possible friends.

“Henry was looking for a friend.” The plot is that simple and that complicated. Although it’s never specified in the text, Henry’s autism can be seen in his behaviors and thoughts. He stands straight and still as the multiracial class convenes, a steady pillar amid the bustle. Henry, who presents East Asian, describes the other children in a manner that gives insight to his point of view: One student is “a tangle of colors,” while another is “a thunderstorm.” Initially dismissed because she likes the “Big Slide,” brown-skinned Katie shares a moment with Henry over the fishbowl. They play together, and readers see Henry standing straight and steady once again but this time looking up with a smile of anticipation as he “waited at the bottom for his friend.” Ink-and-watercolor illustrations interpret Henry’s point of view well, giving context to his perspective. Song’s style allows for small impressions and intentional gaps, like her rough hair textures and the outline of a fishbowl. It is in a state of becoming, like the burgeoning friendship.

Whether on the spectrum or not, friends don’t have to share everything, just enough, and this book sweetly provides.