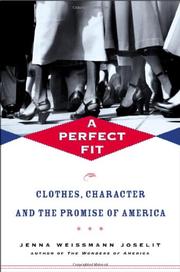 Clothes, Character, and the Promise of America

Fashion meets politics—and gets a little frayed in the encounter.

Cultural historian Joselit (The Wonders of America, not reviewed) examines American clothing styles from 1890 to 1930 as an expression not merely of the individual, but also of the body politic. With the advent of mass-produced garments and the decline in the domestic arts of sewing and mending, ready-to-wear clothing became the norm during this time, she observes, and with this norm came normative propaganda that proclaimed that “what one wore was a public construct, bound up with an enduring moral order.” This propaganda was generally mild and approving during an age when men could be expected to don their silk foulards and women their fox-skin gloves without protest, but it took on more strident tones when, in the 1920s, they began to experiment with odd colors and ever-higher hemlines, exciting prurient interest and theological condemnation in roughly equal measure. (Some years later, she writes, a Catholic priest even developed a line of clothing that, he argued, the Virgin Mary herself might wear were she to reappear on earth.) Drawing on insights from American and cultural studies, Joselit offers an account that is full of fascinating asides and historical oddments, one that gives due consideration to contemporary working-class and minority interpretations of just what constituted acceptable fashion. (As it happens, African-American and Jewish immigrant leaders, among others, urged their followers to dress respectably as a means of gaining status in the larger society.) Her study is marred somewhat by the author’s portentous and sometimes self-important tone—a characteristic of academic work in the field that is likely only to annoy general readers.

Useful reading in a time when, for Americans of whatever age, the rule of attire seems to be anything goes—and the sillier the better.