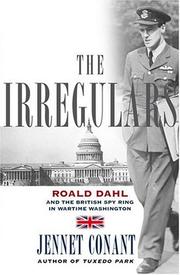 Roald Dahl and the British Spy Ring in Wartime Washington

The noted children’s author was once one of several British agents conducting espionage in the United States.

Advertising-titan-to-be David Ogilvy and future James Bond creator Ian Fleming were also members of the group assigned to infiltrate top levels of Washington and New York society to gain information that would help their government push the United States to enter World War II. But Conant (Tuxedo Park, 2002, etc.) focuses on Roald Dahl, who became a spy after a grievous injury ended his career as an RAF pilot. In her enjoyable popular history, she keeps the narrative moving at a brisk pace, including adequate doses of serious information and juicy gossip. She occasionally goes off on tangents and spends too long on some profiles, but she ably captures the complexity and paradox of the era as she depicts the spies’ active professional and social lives, which included sexual affairs as well as diplomatic briefings. Dahl’s roguish charm and dashing looks helped him become a trafficker of intelligence to British officials and a key provider of leaks to American journalists. Few suspected his secret life. “With his reckless sense of humor and general air of insubordination,” the author writes, “Dahl may have been mentioned to someone on high as having the makings of an ideal informant, if for no other reason than no one so badly behaved would ever be suspected of working for British intelligence.” While Conant admires the literary skills that Dahl eventually acquired, she abhors his willingness to use and discard people as they became more and less useful to him.