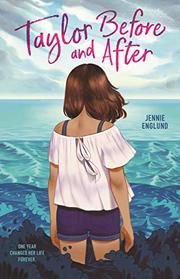 TAYLOR BEFORE AND AFTER

A Hawaii teen charts life before and after the catastrophe that’s reshaped her world.

Three years ago, Taylor’s family (presumed white) left Oregon for Oahu, where her mom’s clinical depression and the friction between her dad and brother, Eli, a high school senior, have worsened. Eli skips school to hang with his surfing brahs and girlfriend, Stacy, partying, drinking, and driving to the North Shore to surf. Eighth grader Taylor escapes into social networking, fantasizing about a career in fashion. Thrillingly befriended by wealthy, stylish Brielle, whose manipulative ways are patterned on reality TV, Taylor allows Brielle to coax her into abandoning one friend and betraying another. Taylor’s responses to classroom writing prompts—dating both before and after the catastrophe—comprise the text. Like Brielle, Taylor’s turned winner-take-all competition into her life template. Triumphant outcomes are transmitted and amplified through social media, but so are humiliation and tragedy. Publicly scrutinized by indifferent strangers, they prove deeply isolating. If the shape of the plot’s defining events at first seems withheld capriciously, the technique pays off in a powerful story charting the evolution of a life-shattering night and its aftermath. Oahu’s dizzying contradictions, from shabby to glorious, and cultural events such as Bon dances are carefully rendered and, like the Hawaiian orthography, largely accurate. Though character names and actions convey Hawaii’s uniquely mixed, multiethnic population, physical descriptions are disappointingly few.

A resonant look at coming-of-age in a socially networked world.