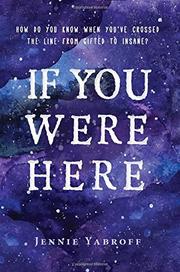 IF YOU WERE HERE

Once upon a time, there was a girl named Tess who could see the future.

She was very good at pretending she was like everyone else. But one day, the facade crumbled, and everyone stopped talking to her. Her only friend was Tabitha, the most unpopular girl in school. Five years later, life still sucks, but it’s bearable. Tess has Tabitha, their regular viewings of Sixteen Candles, and her spot on the track team. But when frizzy-haired, chubby Tabitha returns from summer vacation with a shiny mane, a thinner body, and previously unattainable popularity, it’s suddenly as though they were never friends. When Tabitha dies, Tess feels intense guilt and shame for not warning her former friend that she dreamed of her coming end, and Tess finds herself at the center of the mystery surrounding Tabitha’s death. A subplot dealing with Tess’ mother’s severe mental illness collides with the primary plot in a satisfying but slightly sappy conclusion. Unfortunately, Tess makes repeated, unchallenged references to her “crazy” mother, undercutting the book’s treatment of the condition. The book is titled after the Thompson Twins’ tune from the end credits of Sixteen Candles, and like most of John Hughes’ films, it seems Yabroff’s novel is mostly devoid of people of color, Tess’ Turkish heritage (the source of her gift) generations distant.

A lukewarm work of realism layered with elements of fantasy and mystery.