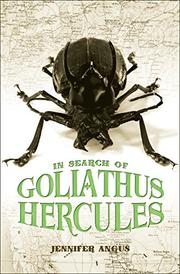 IN SEARCH OF GOLIATHUS HERCULES

In this Victorian adventure, Henri discovers that he can talk to insects and decides to travel to British Malaya to find his father and capture the elusive, man-eating insect, Goliathus hercules.

Henri’s father had disappeared in British Malaya some years earlier, coincidentally in the same area that Goliathus hercules has been spotted. Where other searchers have failed, Henri is certain his newfound talent will lead to success. He joins a colorfully depicted traveling flea circus, planning to make his way from America to Southeast Asia. On his three-year quest, Henri acquires friends both human and insect, the support of the scientific community, and a villainous rival, Mrs. Black. Unfortunately, an underdeveloped back story and poor plotting mar this debut. The human characters are stock, especially Mrs. Black, whose evil master plan is never made clear. However, Angus, an artist who creates installations using bugs, excels with her insect characters. They liven things up with their often-humorous commentary and fierce loyalty to Henri. In a cleverly creepy but inexplicable development, Henri’s increasingly heightened senses—is he undergoing a metamorphosis?—aid him in his hunt. Archival images are used to add interest. Many readers will guess the link between Henri’s father and Goliathus hercules long before Henri does, but the final twist may surprise all.

An uneven effort, but bug enthusiasts may latch on.