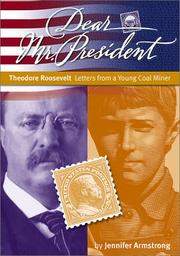 Armstrong (Spirit of Endurance, 2000, etc.) gives the "Dear Mr. President" series a sturdy kickoff with this fictional correspondence between Teddy Roosevelt and a Polish teenager working in the Pennsylvania coal mines. Thirteen-year-old Frank Kovacs is moved to write by McKinley's assassination: "I have advice for you and that is don't let no crazy men near you. They is almost always trouble." Roosevelt's friendly response ("I shall indeed strive to keep clear of lunatics and assassins.") touches off a 16-month exchange in which, as both share carefully researched details about their daily lives, family members, pets, and concerns, Frank raises Teddy's consciousness about the miners' dreadful living and working conditions before, during, and after the strike of 1902. The opening and closing historical essays, bibliography, index, plenitude of contemporary photos and cartoons, plus an associated Web site replete with multimedia articles and links, the correspondents' distinct voices and personalities make this as much a well-told story as a vehicle for conveying historical information. Despite a few bobbles—Frank refers to "scabs" without explaining what they are, and a strike that miners unanimously vote to prolong on one page is suddenly settled on the next—this will score with readers for its clear sense of the time's character and issues, as well as the artful but not labored way the two households are compared and contrasted. (Historical fiction. 10-13)