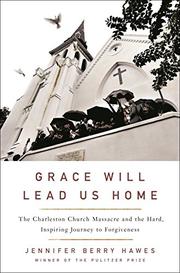 GRACE WILL LEAD US HOME

The Charleston Church Massacre and the Hard, Inspiring Journey to Forgiveness

An award-winning journalist delves into the events surrounding the 2015 massacre of nine people at Charleston, South Carolina’s historic Emanuel AME Church—and how the community recovered after the horror.

Hawes, who writes for the Charleston-based Post and Courier and has won the Pulitzer Prize and George Polk Award, among other honors, begins with the heart-rending details of Roof’s crime, describing the victims, the church, and the fateful night during which the perpetrator infamously completed his plan to create a sensation of racist violence. Though often difficult to read due to the emotional magnitude of the material, Hawes’ book describes the crime in compassionate, detailed, and engaging prose. Shockingly, even after the crime, the pain for survivors and victims’ families was far from over. Inept church leadership would make a mockery of Emanuel’s story through poor pastoral choices, questionable use of donations, and an utter disregard for the needs of those most closely connected to the tragedy. In addition to the bungling next steps of their beloved church, survivors had to endure Roof’s trial, a lengthy and painful reminder of the horrors of that day. Hawes is a talented storyteller, recounting every phase of this saga while focusing on the individual tales of survivors and family members. She also examines the forgiveness some parishioners offered to Roof, which captured the nation’s imagination in the weeks following his crime, and she paints an impressively detailed portrait of the shallow criminal, whom she memorably describes at one point as “a gargoyle come to life.” Hawes dispassionately examines the larger issues surrounding the tragedy, including the debate over the Confederate flag, fringe white supremacist groups, and urban racial tensions, all against the backdrop of one man’s evil choice. Perhaps most impressively, the author does not let her subject drag her into pontificating; instead, she maintains her journalistic poise and balance amid a highly emotional storyline.

At once horrifying and inspiring, engaging and thought-provoking, this is a definitive must-read about the Charleston tragedy.