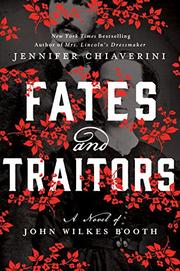 On April 14, 1865, John Wilkes Booth assassinated President Abraham Lincoln. But how did Booth come to such a point? And how did his loved ones miss the warning signs?

Rather than telling Booth’s tale from his own perspective, which would necessitate imagining the intellectual machinations of one of the 19th century’s most notorious criminals, Chiaverini (Christmas Bells, 2015, etc.) uses the perspectives of the four women arguably closest to Booth, the four women who might have foreseen and forestalled his ignominious moment in the spotlight. Beginning with Mary Ann Holmes’ whirlwind romance with Booth’s father, the renowned actor Junius Brutus Booth, Chiaverini expands the dimensions of Booth’s tragedy to classic proportions: just as his father played the hero to glory on the theatrical stage, so did Booth play the villain on the political stage. Booth’s sister, Asia, adored him, but she found his increasing sympathies with the slaveholding states more and more difficult to explain away. Unlike his brothers, June and Edwin, Booth struggled to memorize lines, yet his good looks not only smoothed over many of his acting flaws, but also landed him in the good graces of many women, including Lucy, the impressionable second daughter of Sen. John Parker Hale of New Hampshire. Despite her family’s reservations, Lucy fell head over heels in love with the actor, offering Chiaverini the opportunity to cast shadows over Booth’s conspiring to kidnap (and later to assassinate) Lincoln: as Booth hoodwinks Lucy, Chiaverini keeps the reader’s eye on Lucy’s anxiety rather than Booth’s sedition. Lastly, Mary Surratt enters the tale. As the proprietress of the boardinghouse where Booth plotted with his accomplices, her perspective emphasizes the collateral damage of Booth’s act.

Engaging, sweeping historical fiction that complicates politics by teasing out the domestic and romantic repercussions of treason.