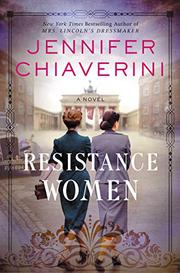 From the end days of the Weimar Republic through the rise of Hitler and the atrocities of World War II, four women boldly defy the Nazis, risking their own lives and those of their loved ones.

Chiaverini’s (Enchantress of Numbers, 2017, etc.) latest historical novel masterfully reimagines the real lives of Mildred Fish Harnack, an American who moves to Berlin to pursue her doctoral degree in American Literature and reunite with her German husband, Arvid; Greta Lorke, a German woman returning from studying abroad at the University of Wisconsin, hoping to make her mark as a writer in the theater world; and Martha Dodd, the politically naïve daughter of the newly appointed American Ambassador to Germany. Linking these women together with the fictional character of Sara Weitz, a Jewish student of American literature, Chiaverini spins a fascinating web of relationships. As the Nazis place increasingly severe restrictions on non-Aryans, Arvid’s cousin Dietrich Bonhoeffer is surveilled for speaking out against the regime, and Mildred finds employment difficult to get, while the jobs that do exist require loyalty oaths to the Nazi Party. Meanwhile, Greta has found love with Adam Kuckhoff, an influential dramaturge with a complicated marital status, and Martha recklessly toys with the affections of both high-ranking Nazi and Soviet officials. The second daughter in the Weitz family to choose a gentile fiance, Sara discovers the anti-Semitism lurking in the hearts of complacent Germans, forcing her to rethink her marriage plans. All four women and their partners find themselves drawn into an underground espionage network—later dubbed the Rote Kapelle by the Nazis—gathering intelligence and connecting with communist cells seeking to destroy the Third Reich. But a single, careless radio transmission could cast everyone into the clutches of the enemy.

A riveting, complex tale of the courage of ordinary people.