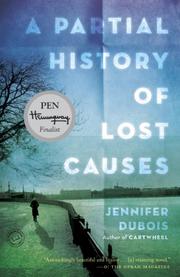 A PARTIAL HISTORY OF LOST CAUSES

He’s a Russian chess champion and would-be President; she’s an American facing terminal illness. Losing gracefully is a challenge for them both in this mildly piquant debut.

A chess prodigy from a humble home, Aleksandr Bezetov enrolls in Leningrad’s chess academy in 1979. The lonely young man falls in with three dissidents who put out a journal documenting arrests of fellow activists, and he distributes it, while racking up ever more chess victories. Then one of his companions is killed in an “accident.” The Party tells Aleksandr he can represent his country if he ends his agitprop; he does so with a clear conscience and wins the World Championship while still in his early 20s. (Here and elsewhere, Dubois appropriates the career highlights of the real-life champion Kasparov.) Meanwhile in Cambridge, Mass., a very different story is unfolding. Irina Ellison is the daughter of a music professor and chess enthusiast with Huntington’s. He dies after 20 years of brain and body disintegration. The odds of Irina beating this inherited disease are only 30 percent. While still lucid, her father had written to Akeksandr, seeking advice on how to make a “graceful exit.” Irina finds the letter after his death. Now 30, she is determined to spare her loved ones (a barely glimpsed mother and boyfriend) the agony of watching her unravel. The obvious answer, suicide, is referenced but not fully considered. No, she will fly the coop, and maybe extract some ultimate wisdom from Aleksandr. Once in Russia, she admits “my quest was absurd.” She’s right, of course. Dubois masks the absurdity by deflecting our attention to Aleksandr’s story (essentially, it’s been his all along). By now it’s 2006, and he’s heading up a coalition of anti-Putin forces, even though it’s a lost cause fighting a ruthless regime. He gives Irina a job, but (surprise!) no exit strategy.

Dubois’ impressive mastery of her Russian material makes one hopeful for a more credible story line next time around.