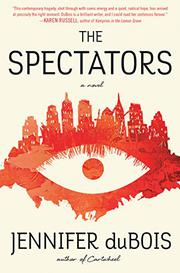 A mass high school shooting prompts a reckoning for a controversial talk show host and those around him in duBois’ (Cartwheel, 2013, etc.) third novel.

“He was Matthew Miller then,” remembers a man named Semi, the host's lover in the 1970s, who knew him as an idealistic lawyer and then a candidate for mayor of New York. But in 1993, when The Mattie M Show publicist Cel is struggling to defuse reports that two high school boys who gunned down multiple classmates watched his show regularly, Mattie presides over a TV carnival of people confessing to “vices and depravities the average viewer didn’t even know existed.” The show’s evolution from a substantive public affairs program to a wildly popular venue for “rubbernecking and mayhem” is more explicable than Mattie himself, an empathetic interlocutor of the damaged and deranged on camera but a mystery to his staff off the air. Semi’s recollections of their affair and break-up intertwine with Cel’s story to create an atmospheric chronicle of New York’s bohemian gay subculture in the freewheeling 1970s, a keening depiction of the AIDS-stricken '80s, and a poignant portrait of Cel, who got out of the rural working class via Smith but still lacks the self-confidence to claim—or even know—what she really wants. Mattie remains remote and enigmatic, even in his final encounters with Semi, which move him toward a fateful change of direction without readers ever really understanding him. This is not a fault but simply a given of duBois’ accomplished narrative, which ranges widely to investigate contemporary culture through the complicated human beings who inhabit it: Cel’s party-girl roommate and a judgmental pal from Smith, a predatory journalist, the TV show’s seen-it-all producer, and one of the shooters (via a scarily thoughtful letter to Mattie) are among the other characters sketched with acuity and perception. The ending respects Matte’s opacity but allows him to make some kind of amends to Semi, while Cel gets the fresh start she deserves.