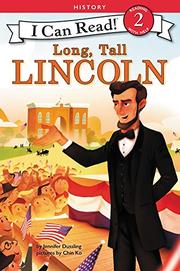 Abraham Lincoln’s ascent to the presidency is recounted in a fluid, easy-to-read biography for early readers.

Simple, direct sentences stress Lincoln’s humble upbringing, his honesty, and his devotion to acting with moral conviction. “Lincoln didn’t seem like a man who would be president one day. But he studied hard and became a lawyer. He cared about people and about justice.” Slavery and Lincoln’s signature achievement of emancipation are explained in broad yet defined, understandable analogies. “At that time, in the South, the law let white people own black people, just as they owned a house or a horse.” Readers are clearly given the president’s perspective through some documented memorable quotes from his own letters. “Lincoln did not like slavery. ‘If slavery is not wrong,’ he wrote to a friend ‘nothing is wrong.’ ” (The text does not clarify that this letter was written in 1865 and not before he ascended to the presidency, as implied by the book.) As the war goes on and Lincoln makes his decision to free the slaves in the “Southern states”—“a bold move”—Lincoln’s own words describe his thinking: “ ‘If my name ever goes into history,’ Lincoln said, ‘it will be for this act.’ ” A very basic timeline, which mentions the assassination unaddressed in the text, is followed by backmatter providing photographs, slightly more detailed historical information, and legacy. It’s a pity that the text is accompanied by unremarkable, rudimentary opaque paintings.

A succinct, edifying read, but don’t buy it for the pictures.