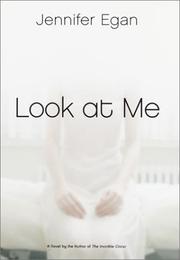 In her sprawling, ambitious second novel, Egan (The Invisible Circus, 1995) questions the shift in America’s cultural underpinnings from industry to information, using as dual settings the hip fashion world of Manhattan and the nation’s demographic and geographic middle, represented by Rockford, Illinois.

Fashion model Charlotte Swenson is driving from New York to her hometown when a car crash breaks all the bones in her face. Convalescing in Rockford, she sneaks into her long-estranged best friend Ellen’s house, where she encounters Ellen’s teenage daughter, also named Charlotte. Back in New York, Charlotte Swenson, her facial bones held together with titanium screws, tries to rebuild her faltering career. How people see her has always defined her, but now friends and associates don’t see her at all; though unscarred, her face is unrecognizable. After blowing both professional and romantic opportunities, she sinks into despair until a botched suicide attempt (one of the novel’s few humorous moments) wakes her up and she begins building a new life. Meanwhile, back in Rockford, young Charlotte, whose family has been rocked by her younger brother’s leukemia, begins to study Rockford’s history under the tutelage of her Uncle Moose. A high-school football star and fired Yale professor whose intellectual insights have driven him toward madness, Moose is perhaps the most disarming, delicately nuanced character in a novel full of interesting supporting players. Young Charlotte becomes sexually obsessed and then involved with a mysterious stranger named Michael West, whose arrival in Rockford coincides over-neatly with Charlotte Swenson’s accident and who seems manufactured from John le Carré spare parts. Egan reminds us too often that her philosophical concern is with appearance: how what is seen defines what is. But any impatience with overwriting and plot manipulations is overwhelmed by the ever-present page-turning energy.

A surprisingly satisfying stew of philosophy, social commentary, and storytelling.