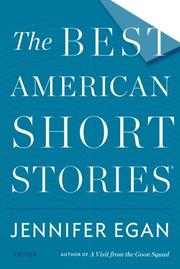 The latest installment in a venerable series whose origin stretches back a full century.

In her slender but charming introduction, guest editor and novelist Egan (A Visit from the Goon Squad, 2010, etc.) recalls that she’d been publishing short stories for 21 years “before I managed to eke one into these pages!” Never mind the misuse of “eke”; we know what she means, and the fact is that there’s a lottery aspect to the whole enterprise. It helps to have been published in the New Yorker, as several of these pieces have been; it helps to be Joyce Carol Oates, who appears here, of course, with a story that seems tossed off for her but that would be a major accomplishment for most other writers. Recognizing the “essential arbitrariness” of the honor, then, Egan moves on to select 20 stories that are perfectly exemplary, each in its way. T.C. Boyle does his existential ennui thing with a yarn (from the New Yorker, of course) that hinges on booze, satellites and rancor (“We’d been fighting all day, fighting to the point of exhaustion, and it infuriated me to think she wouldn’t even give me this”). Continuing the boozy theme—writers and their booze!—Ann Beattie serves up a lovely slice of melancholy with a story of a former student bantering with a dying professor (“Enabler? Don’t use phoney words like that”) while puzzling over why her ex-husband happens to be in the bar at the same time. All are serviceable, none bad, but few of the stories are true tours de force, with one notable exception being Lauren Groff’s “At the Round Earth’s Imagined Corners,” the key word being the penultimate one, and Laura van den Berg’s odd, pensive “Antarctica” and its utterly memorable closing line—fittingly, and artfully, the last in the collection.

Intelligently chosen; essential for students and aspiring writers of fiction as a kind of state-of-the-art (or at least state-of-the-trend) snapshot, with a few standouts.