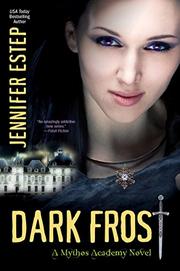 From the Mythos Academy series, volume 3

In Estep’s third Mythos Academy novel, Gwen Frost not only fights but causes more trouble than ever in a mighty clash of titans.

The psychometry gift that has earned her the title of Gypsy takes on new dimensions when Gwen investigates an enemy from the last book. Her best friend, Daphne, whom readers know well at this stage, also undergoes a surprising ripening of her preternatural abilities. Estep’s ingenuity in devising strains of sorcery with which to endow her characters expands to drive her story forward, and set the stage for unprecedented obstacles and revelations. Where the author has previously shielded Gwen from malevolence so dark it would tarnish her soul, she now pitches Gwen into the abyss. Readers will thrill to participate in Gwen’s transformation: She must accept the greatest responsibility yet possible in the battle of good vs. evil that the gods, goddesses and their magical mortals wage. Gwen also faces a difficult choice that a discovery about her recently murdered, and dearly missed, mother further complicates. The outcome is a secret Gwen keeps from friends and even from Logan, her Spartan heartthrob, who finally shares secrets of his own and titillates readers with his admirable ardor.