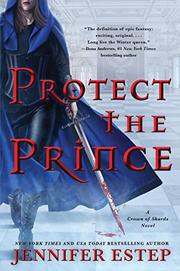 From the Crown of Shards series, volume 2

Estep returns to the fantasy setting established in Kill the Queen (2018) to follow the new queen as she embarks on a reign complicated by treachery and duty alike.

Previously, Evie claimed the crown of Bellona after she killed her cousin Vasilia in vengeance for Vasilia's orchestrated butchery of most of the royal family. But keeping the crown will be the hard part. Evie and the nobles of Bellona struggle to get along—Evie certainly remembers every insult she ever received as a girl who was 17th in line to the throne and had only meager magical abilities. Now, she must earn the nobles' respect and keep them from outmaneuvering her—especially into a marriage with one of their families. That's in addition to making peace with neighboring Andvari, which lost a prince to Vasilia's attack; fighting off more assassins from the evil kingdom of Morta; and daydreaming about handsome, brooding Lucas Sullivan, her friend...and the bastard son of Andvari's king. It's a lot to handle; sadly, the plot doesn't always manage it. A sham betrothal to the other prince of Andvari does nothing but drive a gratuitous rift between Lucas and Evie—it's not clear why Evie feels it's necessary to use her betrothal to lure out assassins when they've already tried to kill her several times by then. Of course, the best way to fight magic-using assassins is just to be immune to magic: Evie's secret gift, which grows only stronger in this book. The thin plot is somewhat redeemed by a genuinely poignant twist, but it's fighting uphill against monotonous setting descriptions, a clichéd romance, and the notion that high-stakes courtly intrigue is best shown by peppering dialogue with f-bombs.

The second book of the trilogy struggles with its own expectations, just like the heroine herself.