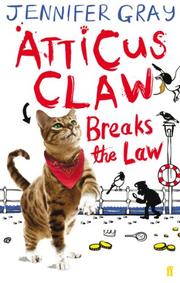 From the Atticus Claw series

A real cat burglar—literally—stars in this British import.

A mysterious job offer takes Atticus, a brown tabby cat with a talent for theft, to an English seaside town. There, he learns that some crafty magpies want to hire him to steal all the town’s jewelry. Magpies being notoriously deceitful, Atticus is suspicious, but the promise of sardines as payment wins him over. In Littleton-on-Sea, not a notably diverse town, he finds a home with the family of a police detective, the Cheddars, and gets to burgling. The more he steals, the more the family’s dad gets to work, so Atticus thinks he’s doing the Cheddars a favor. However, when Inspector Cheddar gets in trouble because he can’t solve the recent crime wave, Atticus decides to turn the tables on the magpies. Meanwhile the Cheddar children begin to notice some interesting things about Atticus. Can they convince their dad when they tell him who's behind the burglaries? And can they do it before the magpies raid the local fair? Gray endows Atticus with such a confident personality that readers will be sure he’ll solve everything, but she includes some nice suspense later in the story when things go drastically wrong. Kids who like a bit of light crime fiction will certainly enjoy it, but readers who love animals, especially cats, will be purring throughout.

A purrfect caper for a not-too-criminal kitty