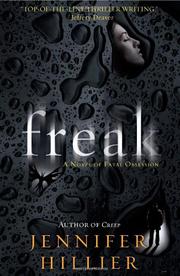 “Free Abby Maddox, 2/10.”  Carved into the back of a murdered prostitute, these words resurrect a violent story that everyone thought had ended.

Picking up where Creep (2010) left off, the latest from Hillier reassembles a cast of characters facing the aftermath of serial killer Ethan Wolfe’s death. Dubbed the Tell Tale Heart killer, Wolfe had seduced and tortured psychology professor and recovering sex addict Sheila Tao. Now that Wolfe is dead and his girlfriend, Abby Maddox, has been incarcerated for attacking Detective Jerry Isaac, Sheila believes she can rebuild her life. Retired from the force and estranged from his wife, Jerry struggles to regain his confidence after Maddox’s attack. The scar she left on his throat is simply the physical manifestation of the scars within his psyche. Suddenly, the wary peace is shattered, and Jerry’s partner calls him back to help with a murder case. The corpse bears a strong resemblance to Maddox, and the killer has strangled her with a zip tie. The message carved into her back prophesies nine more victims. Who is willing to kill for Maddox’s freedom? Twists and turns reveal a website devoted to freeing Maddox, a trash bag full of fan letters to Maddox and a mysterious young man hiring prostitutes online. Jerry isn’t quite ready to cope with this case, particularly when the only leads seem to lie in Maddox’s hands. Even more strange, Maddox wants to talk to Sheila. Luckily, Jerry has a new intern, Danny. Studying to become a criminologist, Danny is, of course, intrigued by the case. Her fresh-faced interest, energy and technological skills rejuvenate Jerry’s hunt. Yet as the kill count mounts, he has to begin to wonder: Is someone orchestrating everyone’s every move? The second book in this series leaves readers hungry for the next.

Taut and fraught with surprise twists, Hillier’s thriller is addictive.