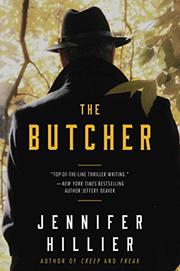 Hillier’s (Freak, 2012, etc.) third thriller fairly shudders with tension. Edward is ready to retire to an assisted living facility and give his grandson, Matt, the family home, a beloved Victorian in a posh neighborhood. An up-and-coming chef, Matt has parlayed his successful food-truck business into Adobo, the hottest restaurant in town, and the reality show networks are calling. The only trouble is that his girlfriend, Samantha, can’t understand why Matt hasn’t invited her to move in, too. After all, they’ve been together for three years. Pressuring Matt, though, isn’t getting her anywhere, and even their friend—well, really Sam’s friend—Jason is a little mystified. Certainly, Matt’s history of anger management trouble gives Jason pause. While Matt renovates the house and works late, Sam turns back to researching her latest true-crime book. This time, she has a personal investment. She’s convinced that her mother was killed by the notorious Butcher. Bored at the retirement home, Edward has become an invaluable sounding board. Like the Butcher’s other victims, Sam’s mother was raped, strangled and left in a shallow grave. Unfortunately for Sam’s theory, her mother was killed two years after Rufus Wedge’s death. Meanwhile, Matt’s contractor has unearthed a crate filled with gruesome artifacts. As Matt investigates the crate’s contents and Sam questions a mysterious informant, their romance unravels and the body count begins to rise. Hillier sends her reader into a labyrinth of creepy twists and grotesque turns. There’s no escape from the brutal truths exposed.

The secrets of the past refuse to keep quiet in this disquieting, taut thriller.