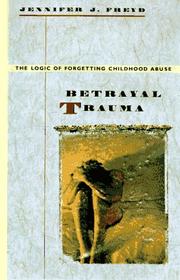 The Logic of Forgetting Childhood Abuse

A cognitive psychologist heats up the debate about recovered memories of childhood abuse by presenting her theory of why and how such memories may be repressed. Freyd (Psychology/Univ. of Oregon) argues that the childhood traumas that are most likely to be forgotten are those in which betrayal is a central factor. According to her betrayal trauma theory, forgetting certain kinds of betrayal, such as sexual abuse by a parent or trusted caretaker, is an adaptive behavior, for by blocking out knowledge of the abuse the child aligns with the caregiver and thus ensures his or her own survival. Such information blockage is not unique to childhood sexual abuse, the author argues, but a common response to everyday betrayals by trusted individuals, be they spouses or bosses or other authority figures. Freyd cites numerous studies to back her assertion that the forgetting and later remembering of childhood sexual abuse is real and well documented, and she illustrates the phenomenon with extensive excerpts from the recollections of Ross Cheit, a college professor whose recovered memories of sexual abuse by an administrator at a summer camp were subsequently corroborated. To explain the underlying cognitive mechanisms, Freyd describes research that she is conducting with both college students and clinical populations. While not directly tackling the issue of whether memories of childhood abuse may be false, Freyd offers support to those who claim they are real by rejecting the view that memory repression is impossible or implausible. In an afterword, she acknowledges the role that her private life has played in her development of betrayal trauma theory and notes that her parents are founding members of the False Memory Syndrome Foundation (which supports parents whose children have accused them of sexual abuse on the basis of recovered memories). Although Freyd argues persuasively, it seems unlikely that her theory will end the debate or that its critics will disregard her personal history in considering its validity. (20 line illustrations)