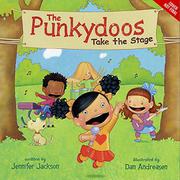 THE PUNKYDOOS TAKE THE STAGE

What’s a music-loving girl to do when everyone tells her now’s not the time?

Lexi-Lou is many spectacular things in her imagination, but one thing she is for real is a girl who loves to sing. She and her dog, Monkey, sing in the morning, but her mother tells her it’s time for breakfast. She sings in her bedroom, and her father tells her it’s time to brush her teeth. When she finally gets some time to rock out, her brother Daniel asks when she’ll be performing. Lexi-Lou thinks a concert’s a great idea, but she’ll need a band. She follows the music to Henry’s house; he’ll play keyboard for her. They follow the sounds of a guitar to Gigi’s house; she’ll join, too. There’s still something missing…they follow several sounds until they find Boo, who’s great on drums! The band’s complete except for a name: The Punkydoos, Daniel’s nickname for Lexi-Lou, will do! Now no one tells them to stop playing. Jackson’s debut is an energetic tale of self-acceptance and making dreams happen for the preschool set. Lexi-Lou does more than any real tyke that age could—and with a whole lot more independence—but little listeners will identify with her enthusiasm. Andreasen’s wide-eyed cartoon illustrations, a mix of spot and full-bleed, are an apt match.

The unnecessary original “sing-along” song without music at the close aside, young music lovers will want to play along.