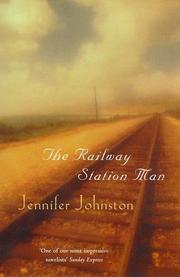 The theme is an over-familiar one--the doomed attempt to isolate oneself from political turmoil in modern Ireland, from psychic turmoil in modern anywhere--but once again Johnston (The Christmas Tree, The Old Jest) fills out simple, almoSt classically predictable patterns with one-of-a-kind characters, elegantly plain narration, and fresh, honest details. Helen Cuffe, 50, is the would-be hermit--guiltily happy to be free of her dull marriage to schoolteacher Dan (accidentally murdered in Derry by a terrorist gunman), largely resigned to her undramatic estrangement from student-son Jack, seemingly content to shlump around her west-coast cottage and make half-hearted attempts at becoming a painter (a long-buried ambition). Soon, however, two escalating involvements are engaging Helen's passions--yet also bringing her back into areas of great vulnerability. Her new neighbor is one-armed, one-eyed Roger Hawthorne, a middle-aged English veteran of World War II who has independent income, notoriety back home as the certifiable family eccentric, and an oddly gallant fixation on old abandoned railway stations: he's in the quixotic process of having the local station remodeled, prepared for actual use--with the help of a charming young carpenter (who subtly stirs Helen both sensually and artistically). Meanwhile, son Jack (an occasional visitor) is becoming ambivalently entangled with a vaguely focused, Dublin-based group of radical guerrillas--with plans for some local storage of weapons. So, while Helen very reluctantly finds herself falling in love with the strange railway-station man (an endearingly modulated affair), Jack and a friend from Dublin are bringing violence closer and closer to Helen's neighborhood. And these two lines of growing commitment will converge on a single horrific night. . . as a suddenly forged Oedipal triangle propels both of Helen's men into disaster. Some of the elements here--Jack's motivations, above all--remain a bit too shadowy. And the criss-cross of political/sexual tensions verges on literary contrivance. But, with rich, rough textures (like Helen's tartness) to humanize the scenario, and gentle foreshadowing to heighten the sense of stark inevitability, this becomes a resonant--and very, very sad--version of an oft-told tale.