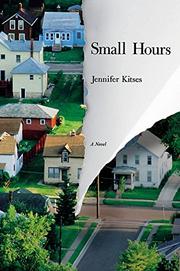 A tense domestic drama, Kitses’ first novel alternates between the points of view of a husband and wife torn apart by what they don’t tell each other. Tom and Helen have moved from Queens to a small town 90 minutes up the Hudson River with their twin 3-year-old daughters, but their life isn’t as bucolic as they had hoped it would be. Though they’re both working hard—Tom at a news wire service and Helen as a freelance graphic designer—they’re having trouble making ends meet, and the town for which they had high hopes turns out to have a seamy underside. As the day goes on, full of frictions major and minor, both husband and wife come close to reaching the breaking point. Tom finds himself in a confrontation with an old lover with whom he has a complicated relationship, while Helen, already simmering with anger, finds herself taking out her feelings on a pair of teenagers she meets in a park, with unfortunate results. Leavened with occasional humor, particularly directed toward the wire service, the novel gradually and inexorably ratchets up its suspense, with each tiny choice that one of the characters makes spiraling out into a path of destructive behavior. Even as the consequences of these choices grow more severe, Kitses keeps them believable so that the reader’s increasing dread can’t be easily dismissed. The author anchors the family’s story in a larger contemporary social reality, in which the actions of the couple are shaped not just by their emotions, but by the “blighted, postindustrial” town where the value of their house is constantly declining, the fact that both Helen and Tom have been edged out of steady jobs into marginal work, and the lack of affordable child care.

The novel succeeds as both a disquieting tale of ordinary horror and a portrait of a marriage at a tipping point.