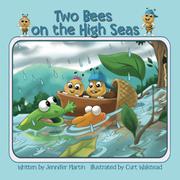 TWO BEES ON THE HIGH SEAS

In this picture-book series starter by author Martin and illustrator Walstead (Perk and Bing and Squirrel’s Sting, 2018), two bees are stranded in an acorn boat during a storm because their wings are too wet to fly.

One summer day, a rainstorm floods the valley where sibling bees Perk and Bing live. They’re stuck on the ground with only an acorn shell to protect them from the water. In the illustrations, the two start the story in their tree and intentionally go to play in the rain—a bit of mischief that isn’t noted in the text. They turn the shell into a boat and find themselves adrift. When they float by their tree, they call for help, but their mother doesn’t hear. Finally, they make it ashore to wait out the storm. Walstead’s cartoon images add unmentioned characters, such as a frog and a fish who assist the unlucky bees; Bing is shown wearing a backwards, blue baseball cap, and Perk, a pink bow. Some verb placements in Martin’s poetry (“The rain, it came”; “Sad and scared was Mother Bee”) may strike newly independent readers as odd. However, the lines still scan well, only changing their rhyme scheme for two pages, and the consistent rhythm makes them easy to read aloud. An illustrated glossary appears at the end.