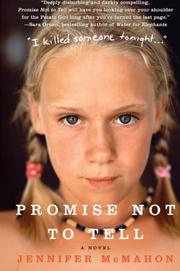 PROMISE NOT TO TELL

Ghost sightings and a copycat murder cause residents of a small town to revisit a 30-year-old crime.

Narrator Kate Cyphers, a middle-aged Seattle school nurse, returns in November 2002 to the Vermont hippie commune where she was raised. She’s there to look in on her elderly mother, who suffers from Alzheimer’s. But the night she arrives, a teenaged girl is murdered in exactly the manner Kate’s childhood friend Del was killed three decades earlier. Interspersed chapters flash back to 1971, when Kate first met Del, who lived on a dilapidated farm with her abusive father and her older brother Nicky. Kate became close to Del, but she didn’t dare be openly friendly toward someone taunted by the more popular students as “Potato Girl.” Back in 2002, both Nicky and 12-year-old Opal, the dwindling commune’s sole remaining child, tell Kate that they have seen visions of Del and think her ghost may be behind the new killing. Meanwhile, Kate’s mother is acting stranger than usual, stealing off in the night and referencing things that only Del could have known. The most definitive link between the two murders is a section of skin cut from each of the victims’ chests; only Kate knows that Del had the letter M tattooed on that spot. Clues point variously to Zack Messier, a former commune member who had affairs with Del, Nicky and Kate’s mother; to Mike Shane, a classmate who once wrote love notes to Del and now owns a tattoo parlor; and to Ron Mackenzie, the old school-bus driver who, though incoherent, seems to know more than he should. And we start to wonder about Kate when her Swiss Army Knife turns out to have been used to slit a cat’s throat—especially since she told us on the novel’s first page that she’d just killed someone.