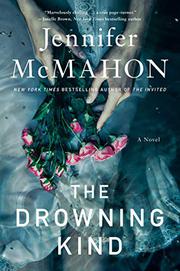 Sinister shadows abound in McMahon’s supernatural thriller about two sisters, a haunted pool, and a legacy of wishes and sacrifice.

As a child, Jackie was often overshadowed by her dazzling older sister. Everything seemed to come easier to Lexie—adventure, friendship, even the love of their family—until, as a teenager, she began to manifest symptoms of “schizoaffective disorder of the bipolar type.” The two girls continued to grow apart; Jackie escaped to the West Coast for college and career. Now their grandmother has died, leaving Lexie her house, Sparrow Crest. Jackie, a social worker, distances herself from her sister for her own mental health, so when Lexie leaves her several manic messages one evening, Jackie ignores the calls only to hear from her aunt the next morning that Lexie is dead, drowned in Sparrow Crest’s pool. Jackie flies back to Vermont and discovers that Lexie was documenting strange occurrences that seemed to center around the pool, which is fed by a mineral spring. Her research into the family history, as well as other deaths by drowning, sparks Jackie’s dread and interest, and she begins to look more deeply into the truth about their family, Sparrow Crest, and the pool that is the dark heart of it all. McMahon alternates chapters about Jackie with chapters about a woman named Ethel Monroe and her husband, Will, who stayed at the springs in 1929 when they were on the grounds of a swanky hotel and who made a secret wish. Like many, Ethel soon realizes that the springs offer both hope and tragedy, and her story becomes interwoven with Jackie’s investigations. McMahon has a gift for creating creepy atmosphere and letting spooky suggestions linger in the mind. She’s also adept at weaving legends and stories into the fabric of what feels like real life, because her characters are so believably vulnerable.

For best results, read it on a dark and stormy night—in a well-lit room, far away from the water.