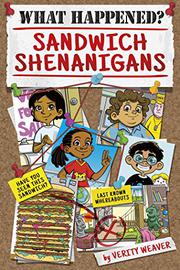 From the What Happened? series

It is the day the fifth graders submit their STEAM projects to be judged at the school fair.

The fair’s theme is “What My Country Means to Me.” After Sam Witt’s 50-state mega-sandwich disappears, the day continues to produce many other unexpected mysteries. Ravi sees the shadows of evil alien invaders in Mr. Hargrove’s classroom. Animal-loving Shaniqua is convinced that the news reporters on TV announced that a tiger escaped from the zoo and is running loose in the neighborhood. When Deanna sees the police standing in front of the school, she knows for sure her arrest is imminent for illicitly taking home the school library’s reference copy of The Wonderful Wizard of Oz. Aspiring foodie author Mateo mistakes the substitute teacher’s pre-labor pains—and baby bump—as evidence she’s the culprit who has eaten Sam’s large sandwich. Moore has cast a diverse group of students in this mystery, mostly relying on naming convention and Huddleston’s illustrations rather than textual details to indicate identity. Troublingly, Deanna claims Pawnee heritage to back up her Kansas bona fides as she auditions for the role of Dorothy. Overall, the characters come across as rather dim—not the sorts of kids actual upper-elementary students are likely to identify with. Companion titles Lab Mice Heist, Math Test Mischief, and Stage Two Hullabaloo publish simultaneously.