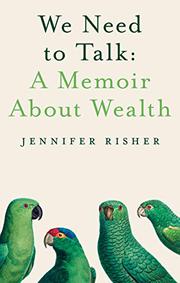 WE NEED TO TALK

A Memoir About Wealth

A philanthropist and dot-com–boom millionaire broaches the topic of extreme affluence by exploring the impact sudden wealth had on her life.

Risher joined the Microsoft human resources department in 1991 after leaving a fledgling career in advertising. At $26,000, her starting salary was modest. But the stock options that came with her job began to skyrocket less than two years later, and her 1995 marriage to a Microsoft executive catapulted her into stratospheric heights of wealth. Yet her new life was no fairy tale. The daughter of middle-class parents who inculcated the importance of frugality, she suddenly discovered her own greed. She remembers, for example, how her nearly one-carat diamond engagement ring only whetted an appetite for a “bigger, flawless, colorless, perfectly-cut stone.” But Risher worked on moderating her desires. Rather than buy a McMansion, she and her husband settled on a house that fit their status as urban professionals. When she eventually left Microsoft to raise children, she worried about lacking deeper purpose and alienating middle-class friends and family members. Aware that the public education system was broken, the author enrolled her children in a private school where parents “sized one another up” and competed to make the largest donations. Eventually, Risher became involved in charitable giving projects. She also connected with other affluent women who made her realize that feeling insecure and struggling to speak openly about money with friends and family were part of the price one paid for being newly wealthy. The naiveté and guilt the author demonstrates may frustrate some readers, but her honesty about the personal dark sides that sudden wealth revealed is admirable, as is her stated wish to see “a system…that helps redistribute the wealth at the top” for the benefit of all. In an era of income inequality, her book, which offers discussion questions about money and wealth throughout, offers a starting point for an uncomfortable subject of increasing importance to everyone.

Not for everyone but candid and topical.