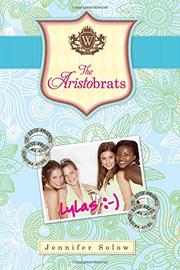 Parker and her best friends Kiki, Ikea and Plum are looking forward to starting eighth grade at the top of the populadder at their exclusive prep school. Then they’re saddled with the task of producing the school webcast, a job that typically goes to the class nerds. No amount of pleading can get them out of their duties. The girls decide that if they can’t quit, they’ll get themselves fired, so they set out to produce an outrageous show. When the show airs, it’s mortification nation and a plummet rather than a vague saunter down the social ladder. The themes of loyalty and remaining true to one’s own style are both present and positive, but the overabundance of middle-school slang and brand-name dropping often gets in the way of the bigger story. The girls’ unerring yet realistic kindness and loyalty to each other set this apart from the too-prevalent trope that positions popular girls as the mean girls. Appealing for fans of The Clique, but not ah-mazing. (Chick lit. 10-12)