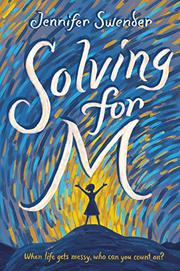 It’s a hard year for Mika.

Mika, an artist, isn’t keen on starting her new fifth-grade math class. However, her quirky new math teacher, Mr. Vann, assigns each student to keep a math journal in which Mika can draw her assignments. (Most chapters are introduced by Mr. Vann’s latest math assignment, highlighted by illustrations that depict Mika’s math journal entries.) While Mika is getting used to being in a class separate from her fourth-grade best friend, her single mother discovers a spot that turns out to be a melanoma. As Mika engages more with her math journal, she begins to use the math to process her mother’s illness, which is more serious than initially expected. She also makes two new friends, whom she leans on for support. The book starts slowly, concentrating on math and school and failing to build the relationship between Mika and her mother such that readers get a sense of contrast with the time prior to her mother’s illness. It isn’t until the third act that the author spends more time and attention to fully fleshing out other characters in their lives, such as her grandmother and her mother’s best friend, her mom’s main support system through the chemotherapy. Mika and her family present white, but her friends and classmates are diverse, and her mom’s best friend is a woman of color.

A sensitive book that starts so slowly its readers may put it down before the real story begins.