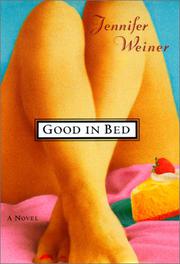 A Philadelphia Inquirer columnist takes a fresh look at the miseries visited on women by their lovers, fathers, and themselves as they try to conquer the world by waging war on their own bodies.

Cannie Shapiro has a lot to be thankful for: a diploma from Princeton, an affordable apartment, and a job covering the pop culture scene for the Philadelphia Examiner that not only pays the rent but offers perks like lunch with the latest Oscar contenders. Still, more is sometimes less, as she discovers when Bruce Guberman, her slacker ex, lands a job at Moxie writing a column called “Good in Bed.” His sign-on effort, “Loving a Larger Woman,” is the opening salvo in a series of journalistic invasions of privacy that send this rock-solid reporter reeling. She blows off steam first to her sympathetic best friend Samantha, then to her preoccupied mother (who recently swore off men altogether and set up housekeeping with a swimming instructor named Tanya), and finally to the perpetrator himself, flinging a barrage of invective and a half-used box of tampons at his unworthy head. But afterward Cannie reconsiders—after all, the point of his column is that, despite her dimensions, Bruce loved her—only to find her former partner vague and evasive. There’s one brief encounter the night of his father’s funeral before Bruce gives Cannie a no-frills brushoff, ignoring her tentatively conciliatory calls. Cannie seeks refuge in the University of Pennsylvania’s Weight and Eating Disorders Clinic until its kindly director, Dr. Krushelevansky, informs her that she’s been washed out of their newest clinical trial because of her pregnancy. Now Cannie has truly weighty matters on her mind as she confronts her losses, past and present, in order to secure the future for herself and her child.

Weiner’s voice rings true as she flouts conventional wisdom about what women want. An unpredictable and impressive debut.