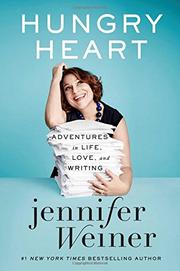 Adventures in Life, Love, and Writing

A bestselling author reveals everything about her life.

Novelist Weiner (Who Do You Love, 2015, etc.) gives readers an in-depth look into her life in these nonfiction essays, the subjects of which have provided much of the fodder for her popular books. Going as far back as when her grandparents met, the author provides an overly detailed timeline of her life. For those who want to know how and when Weiner began writing; what grade school and high school were like for an overweight introvert; why her mother came out as a lesbian and the effect that had on the author; her college life, including the classes she took; her ambitions during and after college; the boyfriends she had and the lovesickness she felt when they left her; how she felt about being a mother and how returning to work when her first daughter was very young affected her; the author’s thoughts on food and weight gain and loss; how her books became so successful; and a host of other minutiae, look no further. The essays are honest, sometimes funny, and sometimes emotional, and they help to show what life can be like for a woman and/or a Jewish woman, but there's so much packed into the book that it becomes overwhelming. Weiner's ability to recall physical details about her 8-year-old classmates or the books she read starting at age 4 may seem impressive, but it's those same details that eventually bog readers down. For Weiner’s many fans, the book will answer the question of “where does she find her writing material?” Readers of her novels and those who like knowing the intimate, personal lives of popular celebrities will find plenty to absorb in this fat volume.

An exhaustive and exhausting autobiography of Weiner's life to date.