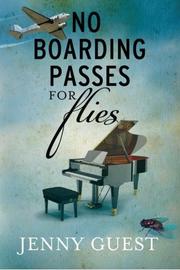 NO BOARDING PASSES FOR FLIES

A young piano prodigy perseveres toward success despite the dysfunctional events of her childhood.

Guest’s debut novel follows the complex social interactions among three generations of a well-off American family. As a toddler, preternaturally mature Sophie becomes a confidante to her father and a mother to her baby sister, Chloe; Sophie’s mother, Clara, is too selfish and incompetent to handle either role. Sophie also secretly deals with two incidents of sexual abuse, which, as she becomes older, cause her to avoid romance and instead throw herself into virtuosic piano playing. Clara disappears for a few years, then returns home to complete the downward spiral after a family tragedy. Sophie’s grandparents on both sides step in to help. Julia, Sophie’s maternal grandmother and an aspiring writer, soon plays a major role in her granddaughter’s life. Sophie’s cousin, Rita, who pursues a more conventional life as a teen, provides an obvious contrast to the charming but isolated Sophie. Guest balances her large cast list with grace, keeping the connections clear and the individual personalities distinct even while failing to choose a strong point-of-view character. The narrative voice is strangely distant, as if someone is sharing the news of the family in well-composed letters meant to be read at leisure, rather than as full-on immersion in the characters’ world. Though the decades-spanning tale focuses on depicting the interactions of strong personalities, the presentation of emotion suffers from telling rather than showing: “It was a very emotional reunion. They were all ashamed and sad for not having much contact with their parents for such a long time.” The author’s foreword states that “neither time nor place are of any consequence”; nevertheless, the novel would benefit from a deeper grounding in the historical context and detail of its vague mid-century American setting, and it might work well explicitly reworked as a period piece.

A well-constructed family chronicle that floats above the events of its characters’ lives instead of diving into their emotional realities.