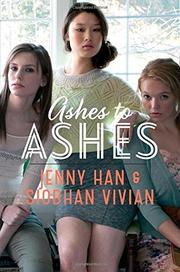 From the Burn for Burn series, volume 3

Once again, readers will find themselves on Jar Island, off the coast of Massachusetts, in the company of (mostly) moneyed youth with little more to do than foment drama among themselves. Once again, the not-so-well-laid plans of ritzy (but good-hearted!) Lillia Cho and rough-around-the-edges (but good-hearted!) Kat DeBrassio will go awry. Once again, readers will wonder, what is going on with Mary Zane? What’s going on is she’s dead, and she has been all along, her spirit trapped on Jar Island and bent on exacting vengeance against Reeve, whom she blames for her suicide years ago. Why did she wait so long for revenge? Why don’t Lillia and Kat try harder to find her or discuss the strange things they’re noticing, and how do they suddenly become expert spell-casters when it’s time to fight back? This trilogy has had readers pondering the differences between a read so bad it’s good and one that is merely lamentably bad. The former includes clichéd characters, predictable plotlines and clunky dialogue, but it also possesses a spirit of insouciance, a joie de vivre that propels readers breathlessly on. In short, it is a fun page-turner. The latter is a slog.

Whittled down to a stand-alone, this might have been a classic of so-bad-it’s-goodness. Instead, the series ends as it began: a tedious, overstuffed mess.